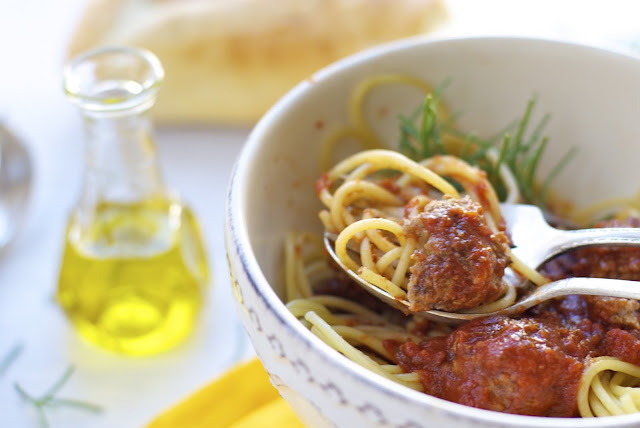 The meatball.
My go-to comfort food.
Simple.
Savory.
Seductive.
These little guys span the globe from Austria to Vietnam. People in Belgium call them ballekes; in Greece they are known as keftedes; in the Philippines they are bola-bola. And of course in Italy it is the well loved polpette .
They can be served as tiny appetizers, in soups and as sandwiches, and of course with spaghetti. No matter what you call it, or how you serve it, a good meatball is one of life's tasty pleasures. 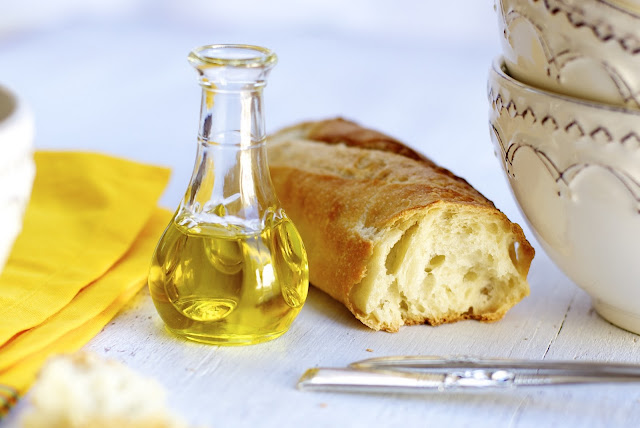 But it's hard to make a good meatball.
My grandmother made {hands down} the world's BEST meatballs.  At six years old, I was her little sous chef, donning an oversized collared shirt in lieu of an apron. She measured everything in the palm of her little, arthritic hand (measuring cups & spoons are just more dishes to do).
And nothing went to waste. 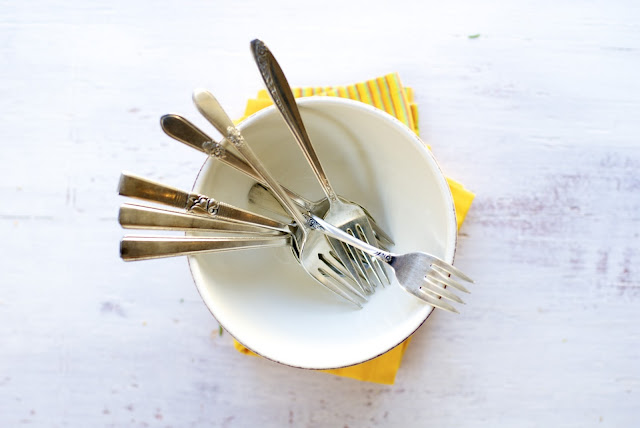 Even the stubborn film tenaciously gripping the insides of the emptied cans of crushed tomato got rinsed with a little water and added back into the pot. She piled all her ingredients in a roasting pan: the ground meat (sirloin, pork and veal) with an egg cracked on top at one end; and breadcrumbs at the other. 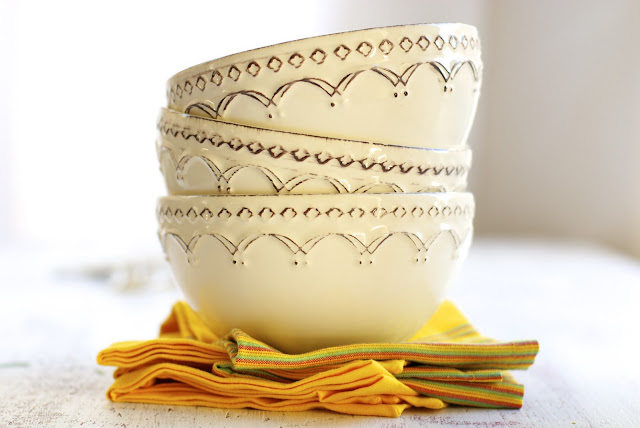 "Only combine the meat and egg until the meat looks like it's covered in snot" Well, that was a no-brainer... Six year olds are granted PhDs in Mucosal Engineering. Sure it sounds gross, but you'll probably remember it.
I sure did. 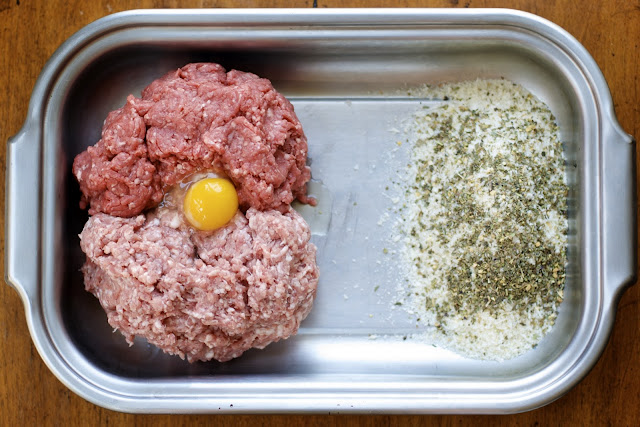 Then come the breadcrumbs.  They can't just be added to the snotty meat/egg mixture. First you must add a little water until it feels like the sand at the beach closest to the surf. Then you combine it with the meat.  It's very important not to overmix. "It should feel like a woman's breast"
Really?
I was six. Breast wasn't even in my lexicon. She grabbed my hand and pressed it against her. "See...like this".
Sure, I had just felt up my grandmother but now I knew what a meatball should feel like. 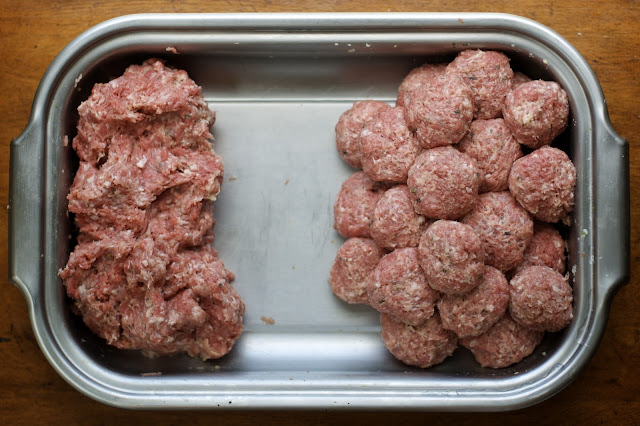 There is only one correct way to form a meatball. You grab enough to fit in your hand "Not too much" and roll it into a ball pressing it rather forcefully, as though you were trying to squeeze water out of it.
{Like the way you made snowballs when you were throwing them at kids from the neighborhood who made fun of your shiny new blue plastic coat that you begged Santa for}.
The newly formed morsels get placed at the end of the roasting pan, opposite the pile of breast-like mixture. As the pile gets smaller you have more room to place them and at the end, you will have a roasting pan filled with perfectly formed meatballs.
See?
Less dishes to do. 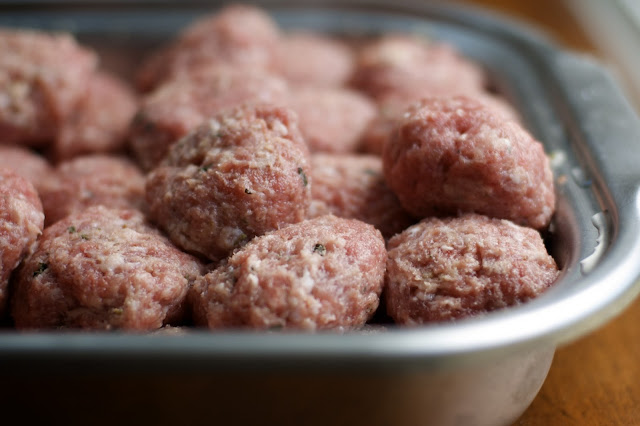 Next they get fried. "Don't overcook them! You just want them toasty. They'll finish cooking in the sauce." Well, most parents don't let their small children deep fry meatballs on the stove, and mine were no exception, so this has taken me years to master.
The oil has be hot. It has to pop when you flick a little water at it. And it only takes a couple of minutes to cook each side.
Some people like to blot them with paper towels to remove the excess grease.
Not us.
Nothing gets wasted. 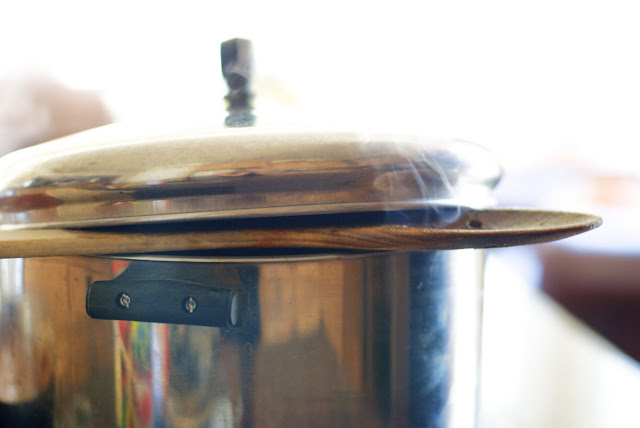 Then the meatballs get added to the gravy that has been simmering on the stove this whole time. This is where love and patience get added.
Which is genetic.
And tends to skip a generation (or two).
If left alone, the meatballs will titanic to the bottom and burn (and a burned pot is no fun the clean).
So the sauce must be stirred.
A lot. 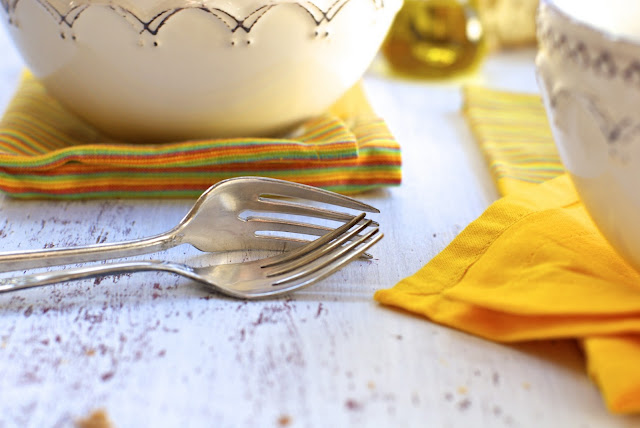 Because she was only 4 1/2 feet tall (she's shorter now) my grandma would pull her step stool up to the stove to stir. She even had a special way of placing the wooden spoon on the edge of the pot so she could balance the cover on top while allowing enough steam to escape so the gravy can reduce.
This trick she perfected because she was tired of cleaning splattered tomato off her stove and backsplash.
The meatballs are done after a few rounds of poker Hollywood are played. 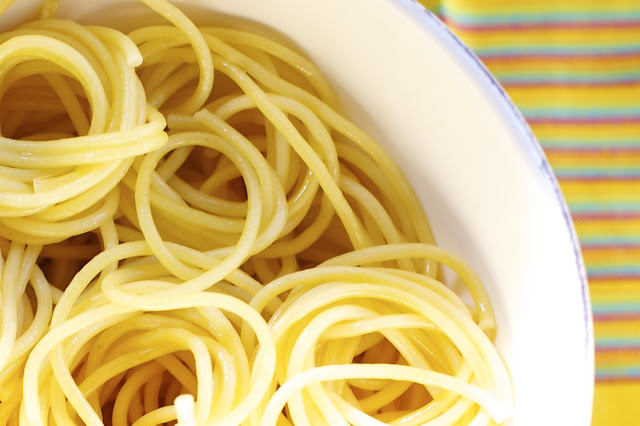 What's great about meatballs and gravy is that you can use them in so many other dishes: stews, chili, pizza, chicken, soups.
Now that I have five kids who can eat their own body weight daily, and a husband with a tapeworm, I make 20lbs of meatballs at a time.
I have 3 HUGE pots going on the stove and if I'm lucky, I'll have enough left over to freeze.
I'm not exagerating.
I wish I were. 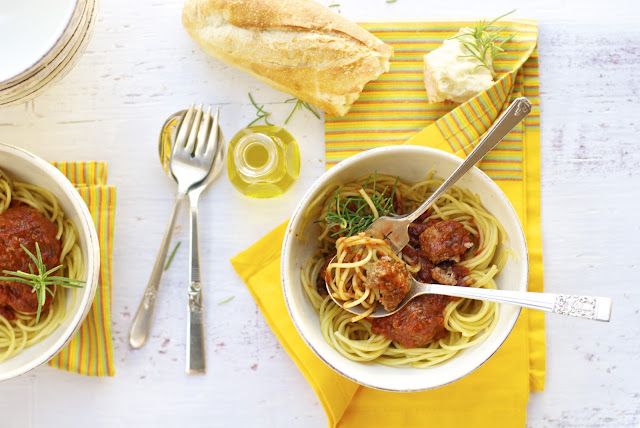 
Add the egg to the meat until just combined (insert snot imagery here).
Add some water to the breadcrumbs until they just stick together and mix into meat mixture. (Insert breast imagery here).
Don't forget your onions.
Press into balls.
Fry.
Cook in gravy for about an hour.

In a stock pot add tomatoes, sugar, bay leaf and Italian seasoning. Rinse the insides of the can with some water and add it back into the pot. Sear pork chop on both sides and toss it into the pot. Saute onions in pan after the meatballs have been fried then add to the pot.
Here's the secret: once all the meat has been fried, there will be lots of delectable morsels stuck to bottom of the pan. Scoop some gravy from the pot, add it to the pan and scrape the bottom. This will loosen all that flavor and clean your pan at the same time. Add it to your gravy.
See?
Nothing gets wasted.